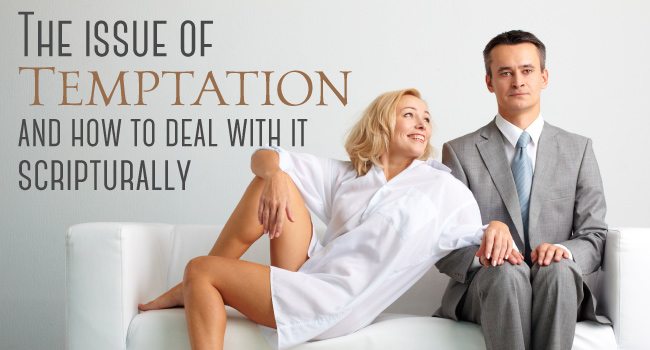 The issue of temptation is one that dates as far back as the Garden of Eden. In Genesis 3, we see how the devil stirred up in Adam and Eve the desire to eat of the tree of the knowledge of good and evil.

Through temptation, the devil convinced them to desire what God had said would kill them. This desire, once within their hearts led to their disobedience, which led to sin, which separated them from God. Today, despite the fact that temptation is now in various forms, the devil still uses the same old tactics. By the help of the Holy Spirit, we shall explore the issue of temptation and scriptural wisdom for how to deal with it.

The Merriam-Webster dictionary defines temptation as a strong urge or desire to have or do something; something that is mostly bad, wrong or unwise. Let’s note here that temptation is not sin. In other words, it is not a sin to be tempted. However, temptation when not properly dealt with always produces desires, cravings and lusts that lead to sin.

Let’s take a look at how the devil tempted Adam and Eve in the beginning. In Genesis 3, the bible says:

“Now the serpent was more subtil than any beast of the field which the Lord God had made. And he said unto the woman, Yea, hath God said, Ye shall not eat of every tree of the garden? And the woman said unto the serpent, We may eat of the fruit of the trees of the garden: But of the fruit of the tree which is in the midst of the garden, God hath said, Ye shall not eat of it, neither shall ye touch it, lest ye die. And the serpent said unto the woman, Ye shall not surely die: For God doth know that in the day ye eat thereof, then your eyes shall be opened, and ye shall be as gods, knowing good and evil.  And when the woman saw that the tree was good for food, and that it was pleasant to the eyes, and a tree to be desired to make one wise, she took of the fruit thereof, and did eat, and gave also unto her husband with her; and he did eat.” – Genesis 3:1-6

The devices of the Enemy

The Bible admonishes us not to be unaware of the devices of the enemy. In the scripture above, we see how the devil subtly led Eve along in this conversation. He did this so the issue of the tree would come up. We see that his strategy was to:

Once Eve saw the tree as good, she desired to eat from it. When they both ate from it, they disobeyed God and died spiritually just as God said they would.

In the book of James, we are made to understand how temptation works. Let’s take a look at this scripture:

“Let no man say when he is tempted, I am tempted of God: for God cannot be tempted with evil, neither tempteth he any man: But every man is tempted, when he is drawn away of his own lust, and enticed. Then when lust hath conceived, it bringeth forth sin: and sin, when it is finished, bringeth forth death.” – James 1:13-15

From this passage, we understand that these are the steps involved in temptation:

Interestingly, these are the same steps the devil used when he tempted Eve in Genesis 3. First, he caused Eve to draw away from God by making her doubt God’s Word. Next, he enticed her by claiming that God didn’t want them to eat of the tree because it would make them like him. When Eve believed this, she began to desire the tree, which led to her sin and spiritual death.

How to deal with Temptation scripturally

Now that we understand what temptation is and how it works, let’s see how God wants us to deal with it.

In 1 Corinthians 10, we see that God is in control of what temptations we face and will not allow us to face something we cannot deal with. Also, with that temptation, He also provides a way of escape for us.

“There hath no temptation taken you but such as is common to man: but God is faithful, who will not suffer you to be tempted above that ye are able; but will with the temptation also make a way to escape, that ye may be able to bear it. Wherefore, my dearly beloved, flee from idolatry.” – 1 Corinthians 10:13-14

Let’s remember that God is on our side. He is not trying to “get” you. He loves you and wants you to live free from addictions and sin.

So let’s go back to our question of how to deal with temptation. First, we must stay in the Word of God. Let’s take a look at James 1:

“Wherefore lay apart all filthiness and superfluity of naughtiness, and receive with meekness the engrafted word, which is able to save your souls. But be ye doers of the word, and not hearers only, deceiving your own selves.” – James 1:21-22

In these scriptures we are encouraged to receive the Word of God into our hearts because it is able to save our souls. God’s Word that is planted in our hearts is what keeps us from sin. We must receive His Word with meekness to be kept away from sin. In John 17:17, Jesus Himself spoke about the power of God’s Word to sanctify:

When we intentionally study God’s Word and meditate on it, the Holy Spirit plants the Word in our hearts. When this happens, the Word keeps us from sin. In Psalm 119, this same message about the power of God’s Word to keep us from sin is explained.

“Wherewithal shall a young man cleanse his way? by taking heed thereto according to thy word…Thy word have I hid in mine heart, that I might not sin against thee.” – Psalm 119:9, 11

This scripture literally says if we hide God’s Word in our hearts, it will keep us from sin. Hallelujah!

So the first and most important way to deal with temptation is to keep God’s Word in our hearts. This cannot be overemphasized. In Colossians 3, the Bible says it again:

“Let the word of Christ dwell in you richly in all wisdom; teaching and admonishing one another in psalms and hymns and spiritual songs, singing with grace in your hearts to the Lord.” – Colossians 3:16

The second way to deal with temptation is to stay away from sin or whatever looks like sin. The Bible says:

“Abstain from all appearance of evil.” – 1 Thessalonians 5:22

The word abstain means to avoid or restrain oneself. This means we must be wise in our daily dealings. We must pay attention to what we say, where we go, what we watch on TV and who we relate with as friends.

In the same vein, the Bible also says we should flee from fornication and other sexual sins. The word Flee means to run away with the aim of escape. It means to retreat or make a quick exit. Many Christians fall into sexual sin because they toy around with sexual situations instead of running away.

“Flee fornication. Every sin that a man doeth is without the body; but he that committeth fornication sinneth against his own body.” – 1 Corinthians 6:18

“Flee also youthful lusts: but follow righteousness, faith, charity, peace, with them that call on the Lord out of a pure heart.” – 2 Timothy 2:22

You may wonder why the Bible says we should flee. We may think that perhaps it would be better to face sexual situations head on and try to overcome. However, the Bible doesn’t say that. It says flee! In Proverbs 7, the Bible tells us why we must flee from sexual sin:

“Let not thine heart decline to her ways, go not astray in her paths. For she hath cast down many wounded: yea, many strong men have been slain by her. Her house is the way to hell, going down to the chambers of death.” – Proverbs 7:25-27

Many strong and mighty men have been slain through sexual sin.

The third and final way to deal with temptation that we will consider is to resist the devil. Let’s see what the Bible says about this:

“Submit yourselves therefore to God. Resist the devil, and he will flee from you.” – James 4:7

What this means is that we must first submit ourselves to God by keeping God’s Word in our hearts. We must also submit to Him by abstaining from all evil and fleeing sexual sins. After we have done these things, we should stand and resist the devil and he will flee. Let’s take note of how powerful God’s Word says our resistance is. It is so powerful that it will cause the devil to flee!

In conclusion, let’s remember regardless of the temptation we may face, God has a way of escape for us. Also, God is faithful enough to make sure that you are not tempted beyond what you can handle. However, all this will count  for noting if you are not yet saved. The first step in dealing with sin is accepting the work of Jesus Christ on the Cross of Calvary. When we do this, all our sins are washed away by His blood. If you are not yet born again, it’s time for you to be saved. Visit our Salvation page here and surrender your life to Jesus Christ today.

If you do sin from temptation, you should know that Jesus will forgive you. As believers, we are not to live in sin but if we do sin, there is cleansing in the blood of Jesus. To understand more about this, please read our message on What to do if you sin.

If you would like to share your thoughts on the issue of temptation, please leave a comment at the bottom of this page. Also, if you have a Prayer Request or Testimony, please submit them via their respective links. We know that as you submit them, God will grant speedy answers.

Finally, if this message has been a blessing to you, share it on social media. You can also sign up to receive our messages directly by email or follow us on Facebook or Twitter by visiting @thebeholdfile. God bless you and a Merry Christmas and a Happy New Year ahead in Jesus name.