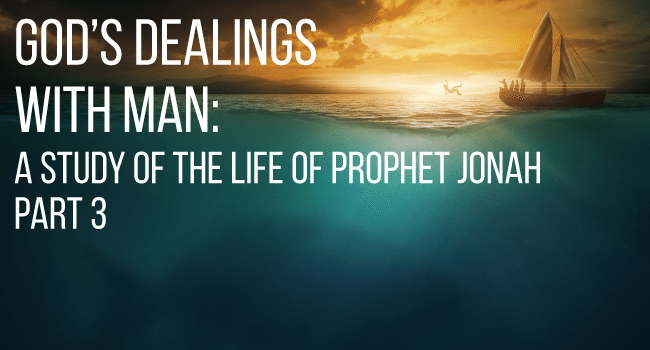 Over the last few weeks, we have studied the life of the bible Prophet Jonah and God’s dealings with him as recorded in the biblical account of his life.

God however also gave man the bible in order for man to learn what actions bring God’s judgment and those that bring his blessings. Thus, man literally determines the course of his life by the actions and decisions he makes. The more often he makes choices in line with the dictates of the bible, the Word of God, the better his life becomes.

In this last part of the message, we will go on to consider and establish some more lessons regarding how God deals with man in general.

Then Jonah prayed unto the LORD his God out of the fish’s belly. And said, I cried by reason of mine affliction unto the LORD, and he heard me; out of the belly of hell cried I, and thou heardest my voice…But I will sacrifice unto thee with the voice of thanksgiving; I will pay that that I have vowed. Salvation is of the LORD. And the LORD spake unto the fish, and it vomited out Jonah upon the dry land. – Jonah 2:1-2, 9-10

Praise is capable of moving God in ways nothing else can. Time and time again across the pages of scripture, we see how God was moved to do literally mind boggling things simply because man worshiped and praised him.

Psalm 22:3 further buttresses this point by explaining how God literally inhabits the praises of Israel;

“But thou art holy, O thou that inhabitest the praises of Israel”.

It is important for us to note this because although the entire Second chapter of the Book of Jonah is devoted to the Prophet’s prayer in the belly of the fish, God only commanded the fish to throw Jonah upon the land when he promised to pay his vows of thanksgiving and praise.

God is not moved by our tears, complaints or even our well thought arguments. However, when we engage the power of praise in our petitions to God, he attends to our requests personally because he literally lives in our praise.

Another lesson we learn from Jonah is that there is no situation too devastating or problematic that can deny God of the praise and worship he deserves. We do not thank God for bad things that happen to us. Rather, we thank God despite the bad things that happen. We must make the choice to follow the admonition given in scriptures:

In everything, give thanks… – I Thessalonians 5:18

Next, we will consider a lesson which in my opinion is one of the most important in the book of Jonah. I consider the book one of the most fascinating of all the books of the bible because we see how God literally “set up” Jonah for lesson after lesson.

First, we see this in chapter 1:

And then towards the end of the first chapter again, we see another act of intervention from the Lord:

So they took up Jonah, and cast him forth into the sea: and the sea ceased from her raging. Now the LORD had prepared a great fish to swallow up Jonah. And Jonah was in the belly of the fish three days and three nights. – Jonah 1:15, 17

There is a pattern that runs through the above two scriptures. That is the pattern of God’s sovereign intervention in the creation of circumstances to teach Jonah. The scriptures say that the storm that forced the sailors to throw Jonah overboard was sent by God himself. It also says that the Lord prepared a fish to swallow Jonah up once he was thrown overboard. This pattern is even more obvious in the fourth chapter of Jonah:

Then said the LORD, Doest thou well to be angry? So Jonah went out of the city, and sat on the east side of the city, and there made him a booth, and sat under it in the shadow, till he might see what would become of the city. And the LORD God prepared a gourd, and made it to come up over Jonah, that it might be a shadow over his head, to deliver him from his grief. So Jonah was exceeding glad of the gourd. But God prepared a worm when the morning rose the next day, and it smote the gourd that it withered. And it came to pass, when the sun did arise, that God prepared a vehement east wind; and the sun beat upon the head of Jonah, that he fainted, and wished in himself to die, and said, It is better for me to die than to live. – Jonah 4:4-8

In the above passage of scripture again, we see a rare display of God’s sovereignty as he prepared situation after situation for Jonah to pass through. However, it is worth noting that these were not situations orchestrated without purpose. The Lord created the scenarios so Jonah could understand why he was so concerned about the people of Nineveh.

We learn a great lesson from this section of the book of Jonah: that God is sovereign and is able to do anything to anyone, however and in whatever manner he so desires.

This is particularly important to note when we face challenges. We should seek to find out what the Lord is trying to teach us through those circumstances. It is however important to mention that even though God is sovereign, he has decided to hold himself accountable by the words he has spoken in the bible. He will not deviate from them or go against the things he has said he will never do. Also, we must understand that God will never use sickness or poverty to teach his children anything. A certain wise man put it in these fine words: “Heaven is not so bankrupt as to use the resources of hell to teach God’s children.”

In conclusion, the summary of the book of Jonah makes us understand that God does have personal relationships with his servants; a relationship beyond his using them to speak or act on his behalf. God would rather have a close father-son relationship with each of us than use us and not have a relationship with us. We notice that Jonah was free to express his own opinions and desires however wrong they were, yet God went out of his way to teach Jonah and show him through experience his perspective as God.

God does all these things with us severally without our noticing. However, through a clearer understanding of these truths, I believe we can learn to have a deeper walk with God.