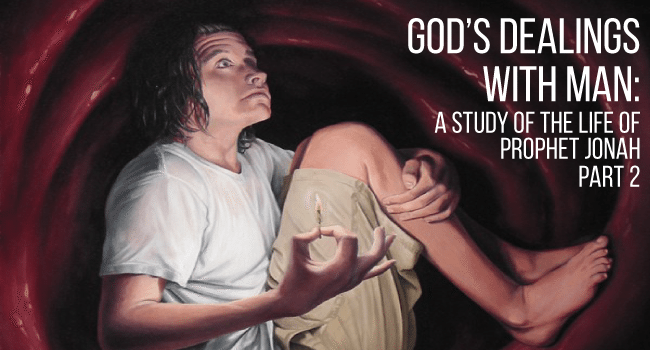 In the first series of this message, we established certain lessons that can be learnt from the book of Jonah in the bible.

Firstly, we established that regardless of the message or assignment a man is given by God, his right to free will is not denied him and he is free to act in whatsoever way he desires; in obedience or disobedience. This is also regardless of the mode by which the message was delivered or how spectacularly it was given.

Secondly, we were able to establish that even though man has been given free will, God also acts in response to man’s choices in such a way as to help man see the error of his ways and turn his eyes back to God.

That being said, we should note that the recordings of the Bible were Holy Spirit inspired and accurately detailed without bias to persons, their status or their wondrous accomplishments. The bible records the highs and lows, victories and failures of biblical characters without bias to their eternal standing in the corridors of heaven. This is particularly important for this present day and age because we can better relate to them when we see their mistakes and successes. It is certain that an account of only the victories of biblical men and women would have been very loop-sided and would have given us the impression of perfection about these biblical characters which just was not so.

“And they said everyone to his fellow, Come, and let us cast lots, that we may know for whose cause this evil is upon us. So they cast lots and the lot fell upon Jonah. Then said they to him, Tell us, we pray you, for whose cause this evil is upon us; what is your occupation? And from where come you? What is your country and of what people are you? And he said to them, I am a Hebrew; and I fear the Lord, the God of Heaven, which has made the sea and the dry land.” – Jonah 1:7-9

I am of the opinion that Jonah most likely did not know that God would come after him as he ran away in the manner that he did. I also doubt that he knew the import of his actions or the sensitivity of the assignment he had been given by God to the city of Nineveh. However, we can particularly relate to the fact that Jonah ran away from God’s assignment for his life because there have been times when we may have intentionally acted in opposition to very clear directives from God.

In any case, the fact that God came after Jonah in rebuke and delivered him in his mercy is a great comfort. This clearly spells out the fact that God is merciful and that our failures do not make it impossible for him to reach out to us in deliverance.

God IS merciful! Psalm 136 chronicles the merciful acts of God to the children of Israel from the story of creation to the entry of the children of Israel into the promise land. The bible is gloriously littered with account after account of the merciful acts of God towards men and his tendency to reach out to men when they are not deserving or even desiring such acts.

The crowning act of God’s mercy was the coming of Jesus Christ; God in mortal flesh, to die and redeem us back to God. This is an awesome revelation because it shows that there is no depth to which man can fall that his mercy is not able to reach and deliver from!

We must note though that the mercy of God is no excuse for Sin, disobedience or foolishness. Although God is merciful, he is also a God of judgment. This duality of God’s acts is seen across the bible as explained in 1 Samuel 2:6-7:

More Lessons from the life of Prophet Jonah

Then said they to him, What shall we do to you, that the sea may be calm to us? For the sea wrought and was tempestuous. And he said to them, take me up, and case me forth into the sea; so shall the sea be calm to you: for I know that for my sake this tempest is upon you. – Jonah 1:11-12

Even though this message series is a study of God’s dealings with man using the book of Jonah as a case study, I believe that there are a few things that can be learnt from Prophet Jonah and his actions after his attempt to run away from God’s assignment.

Firstly, it’s interesting to note his answer to the questions he was asked by the distraught sailors. On being asked his occupation and where he was from, he declared that he was a Hebrew and that he “feared the Lord”. This is rather interesting because even though he was a prophet, he considered his occupation as the fear of the Lord. This suggests that we as believers are to hold our relationship with God as our occupation and the definition of who we are.

Secondly, we see that Jonah was ready to die to ensure that the innocent passengers and sailors were not made to pay for his faults. It must have taken great courage and a real depth of integrity for him not to lie about who he was and the fact that he was running away from the Lord as well as the suggestion for the sailors to throw him off the ship. His attitude during the raging storm had a great deal to do with God’s intervention and his deliverance. We must always keep a good attitude even in the face of storms and must do all that is in our power to ensure that others don’t suffer for our mistakes or disobedience.

In the next and last series of this message, we will conclude on what could be considered the most important lesson and message of the book of Jonah; the Sovereignty of God. Lets move on to Part 3 of this Study of the Life of Prophet Jonah.