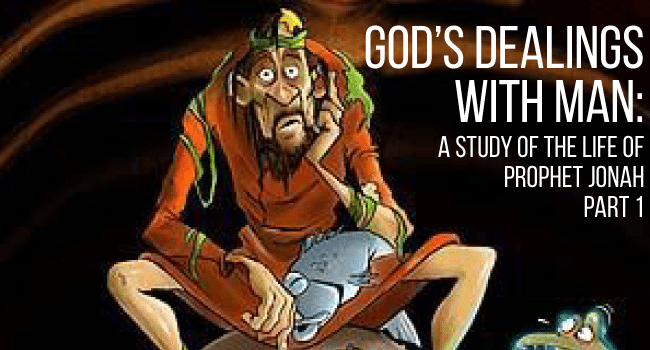 T he book of Jonah is one of its most fascinating books in the Bible. As a little child, I and my other colleagues were particularly fascinated by this story because of the singular fact that he was swallowed by a fish and yet lived to tell of it.

Needless to say, this is one of the reasons why many have also been fascinated by the story of this prophet. The book of Jonah unlike other prophetic books of the bible is one that also documents the relationship between the Prophet and his God and not just prophetic prophecies. It is clear therefore that a lot can be learnt regarding the dealings of God with man through this book.

The biblical account of the life of Jonah, which is probably an account of just a few weeks of his life tells the tale of the independence of man in his relationship with God, the absolute sovereignty of God and other themes such as God’s mercy, praise, faithfulness and love. These are themes that run like a continuous threaded line through the pages of scripture. Our aim therefore through this series of teachings will be to understand as much as we can from the entire book of Jonah.

Arise, go to Nineveh, that great city, and cry against it; for their wickedness is come up before me. But Jonah rose up to flee unto Tarshish from the presence of the Lord, and went down to Joppa; and he found a ship going to Tarshish; so he paid the fare thereof, and went down into it, to go with them to Tarshish from the presence of the Lord. But the Lord sent out a great wind into the sea, and there was a mighty tempest in the sea, so that the ship was like to be broken. – Jonah 1:2-4

We are introduced to the story of this Prophet by the divinely prophetic phrase “Now the Word of the Lord came unto Jonah…”. From this singular phrase, we understand that he was a Prophet ordained of God and separated to serve his generation as is seen in other biblical books such as Isaiah and Jeremiah where the same phrase is used. We also understand that he was given a prophetic assignment to speak to a certain people on the behalf of God. However, for reasons we can’t specifically pinpoint, he chose not to go on this assignment and instead run away from God.

God’s purpose or specific assignment to man will never deny him of his free will to choose to obey or not obey. God gave man the right to free will and will never violate or take away that right. It is also important to mention here that this is regardless of how spectacularly that assignment was delivered. The Apostle Paul made mention of this severally in his letters to the Corinthian church when he emphasized the need for balance between orderliness and the manifestation of the gifts of the Holy Spirit in public meetings of the church (I Corinthians 14:26, 40).

LESSON 2: From the above quoted scriptures, we also understand that just as man has the right to make a choice regarding the revelation of the will of God to him, God also has the right to act or make decisions based on man’s actions (Jonah 1:4). In the beginning, God took certain actions as a result of man’s failure to obey his injunction not to eat of the tree of good and evil. Man was thrown out of the Garden of Eden and forbidden from approaching the tree of life (Genesis 3:22-24). However, it is important to mention that God is a God of love and his actions are always an expression of his love. Hence, every time we take a wrong step, God always acts in such a way as to turn our eyes back to him; to obey him. The bible likens these chastising moments as an act of mercy and love from God in Hebrews 12: 6-11 and admonishes us to endure them even though they may be painful because in the end they will yield “the peaceable fruit of righteousness unto them which are exercised thereby” (Hebrews 12:11).
Therefore, we understand that man has the right to free will and is completely responsible for his obedience or disobedience to God’s Word to him. We also understand that God, regardless of man’s disobedience is free to act in such a way as to turn man’s eyes back to him; even if it requires the help of the proverbial giant fish.
In the second part of this series, we will explore more lessons from God’s dealings with man in the book of Jonah. Let’s continue to the second part of the message.